Bad things happen. They always do.

That is why we need to take caution and be safe in many things we do. Including our deployment process.

Some of the worst outages I’ve seen could have had their impact minimized or even could have been avoided with a proper process of safe deployment.

In this post, we’ll cover some safe deployment practices which I’ve seen or used in cloud services that have made the deployment process safer.

Before we begin, let’s talk about some general high-availability basics:

To get the general idea of safe deployment, let’s analyze two approaches I’ve seen and used in the past, that have many safe deployment elements in them.

The core idea in this approach is that you have two environments which are exactly the same (deployed in the same DCs, the same amount of Scale Units etc…) for the cloud service you want to deploy safely. In addition, you will need some mechanism or component to have the ability to easily and gradually reroute requests from one environment to the other. One good candidate for such a component would be a Gateway Routing component. Let’s assume we use this component for now. 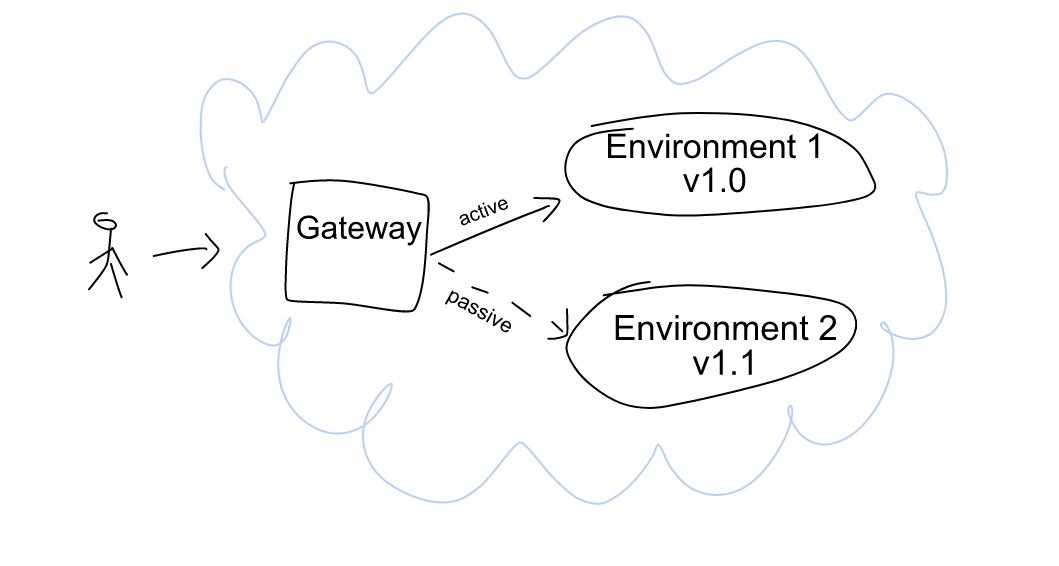 After the traffic was shifted, the previously passive environment is now the “active” environment and vice versa.

I would strongly recommend you read my previous post about “Tenant Pinning” before you continue reading this one – as the Tenant Pinning concept will greatly enhance the efficiency of this approach.

The idea behind this approach is that you deploy your new version in five pre-defined ordered waves (rings). Each ring defines a group of your cloud service instances.

You deploy the new version to all the services in a single ring, wait, and move on to the next ring. Each ring (usually) contains a larger amount of service instances than the previous ring. This means that a deployment to ring 1 should have the least impact on your production environment, ring 2 will have a little bit more impact, and so forth. After ring 5, all of the service instances have been upgraded to the latest version.

Now, after you read my previous post and know what tenant pinning is :), let’s assume for the next example that you have 2 scale units in your production environment. Each scale unit serves requests from a different set of tenants.

Let’s look at an example for defining the deployment rings:

Let’s analyze the rings in this example to understand the concepts behind the ring based deployment approach. In the example above, the assumption is that the North American region has the largest volume of traffic, Europe has the 2nd largest, and Asia has the least amount of traffic.

Ring 1 includes a single scale unit in a single DC. The DC chosen here is a DC of the region with the least amount of traffic. In the above example, ring 1 exposes half of Asia’s region traffic (only one DC in the region) of half of the customers (only one Scale Unit).

Ring 2 includes a single scale unit in a single DC. The DC chosen here is a DC of the region with the 2nd smallest amount of traffic. We do this because we want the new version to be exposed to a larger volume of traffic in a specific DC\ScaleUnit and see how it reacts under a little more load. Also, deploying the new version to a different region will probably mean it is going to serve more “kinds” of workloads supported by the service. Your customers in the Asia region might not be using the same workloads the European customers do.

On ring 3 we complete the deployment of more (or all) scale units in the first two DCs. This way, if there are any service dependencies which are shared across all scale units in a DC, you basically test that there are no regressions in the performance of your new build in the case that it is using new API’s\workloads\operations with your dependencies. In this ring, we also deployed to the new build to two different DCs at once in a new scale unit – which again, can potentially expose even more types of workloads and usages, because scale unit 2 is serving a different set of customers than scale unit 1.

We complete the deployment to all remaining DCs.

You’ll definitely want a Ring 0 that is deployed before ring 1. Ring 0 will use a special scale unit that will not serve any production traffic directly. In the above example, this special “Canary” scale unit is in every prod DC. You don’t have to host the Canary scale unit on every DC, but it does have an important benefit to it – we’ll discuss this one later.

There are many things you can do with ring 0 to verify the quality of the version you are about to deploy to production.

The points and approaches discussed in this post are mostly to give you the general ideas of what you need to think about when planning your deployment process. Only you know best which of these ideas can work well for your service.

Special thanks to Radhika Kashyap for sharing her knowledge on the topic with me, which helped me to better present the ideas in this post.